Ever heard of people banding together around an idea, and using their personal network of friends and family to popularize that idea? Of course, you have. Any time your close friends call you to join them for a movie, or for a cross-country trip or vouch that the new iPhone is the latest greatest gadget you have to have, you’re experiencing group activism. When that happens on social media, it’s called group social media activism. Pretty obvious, right?

Group Social Media Activism is when a group of people use their social media presence to push out a common idea, causing a ripple effect of public awareness and public interest about that idea.

Activists, artists, even successful companies engage in group social media activism in order to polarize their audience to action. Whether it’s a fundraiser or a new product launch, group social media activism is the fastest way of letting the world know about it. Imagine if you had 100, 500, 1000 people all using their social media presence in a coordinated effort to push out a message to their direct connections. It doesn’t take much for the ripple effect to kick in.

If you ever wondered how and why some things go viral, it’s not so much the content of the message. It’s the system behind the message. And that virality system is called group social media activism. Things don’t accidentally self-ignite. You need an ignition moment, and someone to fan the flames. 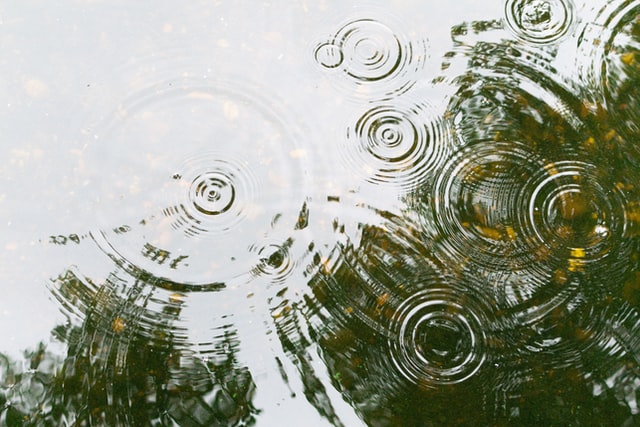 Photo by Ethan Kent on Unsplash

Group social media activism rests on a group of people, a common message, and some serious coordination. The larger the group, the more difficult it is to coordinate the group. Basically, the coordination is about linking the source of the message to the disseminators of the message in a timely, effective manner in order to push your message into the realm of virality. Groups will want a single source, a single idea to get shared by everybody in the group, in a seemingly random manner but still within a tolerable time. What good is a positive voice for an event, after the event has happened, right? If there was a sale about that latest, greatest new iPhone, what use is it to you if you hear the news a week after the sale ends.

Virality, in marketing terms, means the number of people needed to polarize your entire audience and start listening to your offer, whether it’s a fundraiser or your business offer. If your offer is aimed at a relatively small, niche market, you don’t need tens of millions of people to see your message. You may not have that many people in your entire market.

This is why we created the Populizr Enterprise system. It is built with the end in mind: making social messages go viral. Just a clarification here: virality in a broad sense happens when tens and hundreds of millions of people see a funny pic or a goofy video and engage with the content. Virality, in a more strict sense of promoting an idea or an event, happens when your target audience becomes growingly aware of your message without your direct involvement in that growth. If you’re a government contractor or a military contractor, you’d achieve virality when those few hundred decision-makers see your message. If you’re promoting say a book, you achieve virality when the first few thousand people who’d immediately buy the book hear about its existence. You’d also achieve virality if a few thousand people hear about your new product or service.

Of course, you’ll want to have a defined audience, and a way to measure activities and effects, but that comes with the territory of marketing. You already know your audience (hopefully) and you already have some basic analytics setup with Google Analytics that will help you see where’s your 80/20 so you can focus and scale the messages that bring the most traction with your audience.

Now, knowing the few building blocks, let’s gid a bit deeper in each one of them and show how tackling them the smart way helps your team create the ripple effect and push your messages to go viral.

The Message: Your ground-zero in achieving virality and getting value from it all

Most of the times, companies and organizations get so zoomed-in on achieving social virality, that they forget that social media virality is not the end goal. It’s just a tool to drive targeted traffic to a website or a web page where you can extract real value from all that traffic.

Social virality without a web page to capture the traffic is like an explosion without a target. Lots of noise and no measurable work done. Each stick of dynamite needs its own hole to explode in, and that’s how we move mountains.

This is why every properly executed marketing campaign has a landing page. You want people to land somewhere meaningful for them, so they would do something that is meaningful for you. Having a target, a landing page is even more important when you have more people pitching in with the social media outreach. All that buzz and all that interest will have to land somewhere if you want to achieve your marketing goal.

The best way to capture that eventual buzz and interest is by building a solid landing page with clear value for the audience and a clear call to action. It can be a blog post that addresses a clear pain/frustration, and the call to action will be your promise to solve that problem for them. Or it can be a complex funnel with more pages, with email sequences and so on. Either way, you need a target, somewhere to drive all that social buzz and get measurable value from the noise.

Once you have a target URL to promote, whether it’s a blog post or a proper landing page or a full-blown funnel, you will need social media teasers. This is where most marketers get it wrong. You don’t just take the URL and post it on social media over and over again. This is a poor practice because you’re constantly posting the same stuff over and over again. Imagine how that looks like from your audience’s perspective. If you repeat the same stuff over and over again, it means that you don’t have much to say, and you’re boring as a brand. This means that followers will not want to follow you on social media as there’s not much to follow, and they don’t lose much by not following you. Their added benefit is that their social feed will be cleaner and more engaging. So, what usually starts as a desire to engage the audience, ends up alienating them even further.

Poorly executed social media marketing alienates your audience because they experience your repetitive messages as spam.

The smart way to post that URL to your social media profiles is to use a programmatic approach using advanced social media scheduling tools. But even they get it wrong most of the time.

Most of the time, social media scheduling tools focus on scheduling (duh) instead of helping you build a proper social media marketing campaign that will attract instead of alienate your audience. The way to do this is by taking your URL and help you build more unique social media posts and THEN schedule these unique individual social media updates that all point to the same URL.

Populizr uses this approach of a matrix-builder. It takes the URL you want to promote and sets the stage for you to create up to 25 unique social media posts around it. The entire process can be as quick as 3-4 minutes. 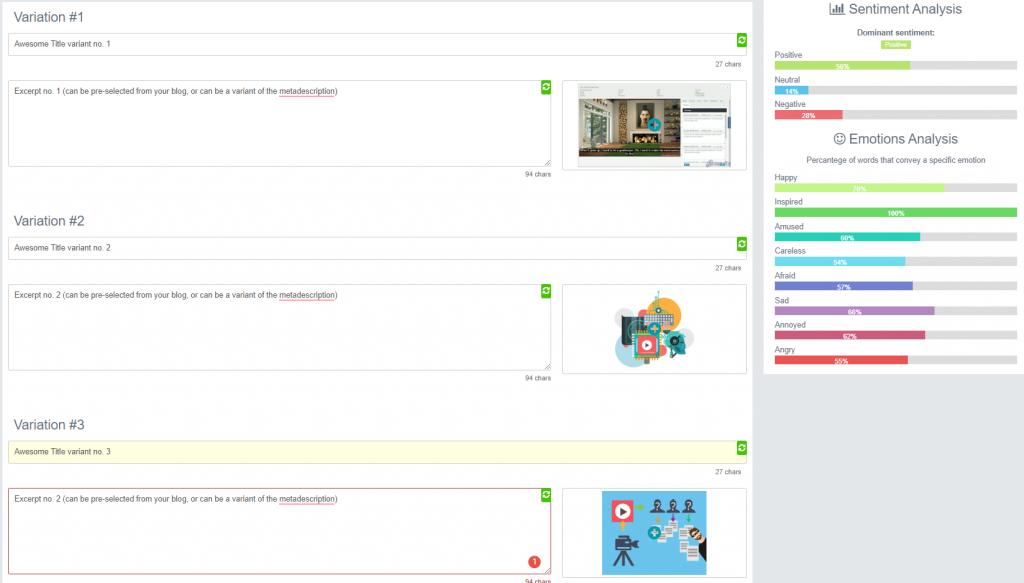 The image above is how the campaign builder looks like in Populizr. The short text fields are hosting the Title variants while the larger text boxes are housing the excerpt you can pick from your blog, or use a rewriten variant of the metadescription. To the right, the images are from the blog post too. Populizr automatically pulls all of the images you have in the target URL, and uses them in the matrix for variation building.

In the case above, we see 3 variant groups: 3 title variants, 3 excerpt variants, and 3 images. Populizr then builds 9 social media updates by combining each image and title with a fresh excerpt. If you want to go super-pedantic (and you should), you can fine-tune the copy of each text box and see what kind of emotions each title and excerpt will trigger in your audience’s mind. Naturally, depending on what kind of emotion you want to trigger, you can tweak the text to be either more positive with more of the “positive” emotions like Joy and Inspired, or you can go with more negative sentiment and push the Anger and Annoyance as dominant emotions.

Once the building blocks are finished, Populizr creates the variants, and you’re a few clicks from scheduling the campaign for the entire team, whether it’s 10 people or 10.000 people in your organization. Below is a screenshot of the finished social media updates popup, where you can see how your social updates will look like, and either go on to the Scheduler or go back to the drawing board to edit out any typos or change the wording in some fields: 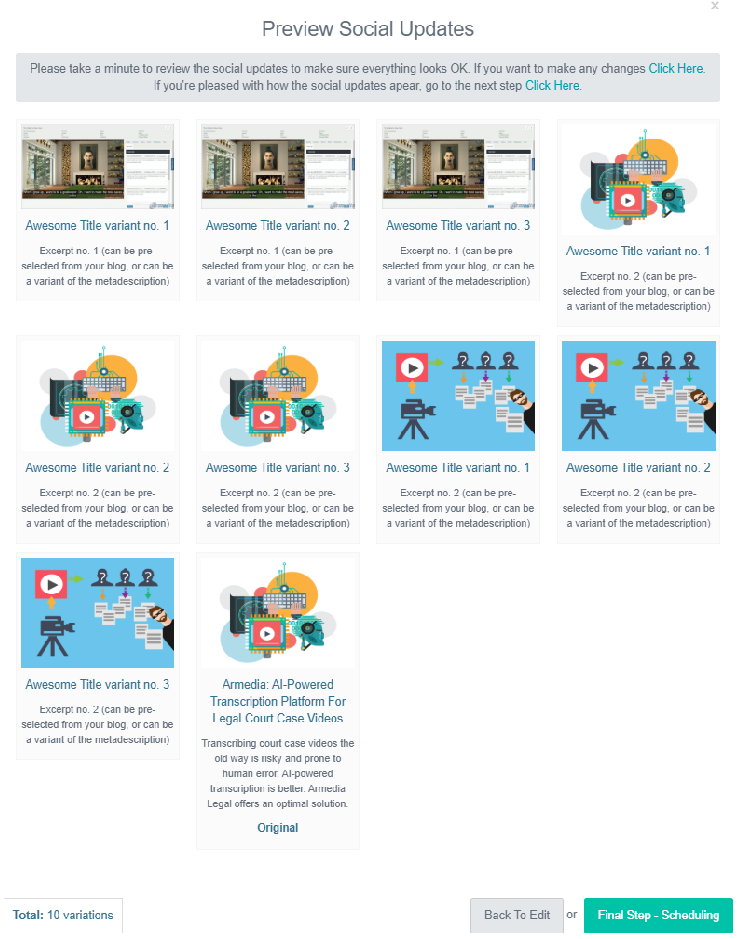 As you can see, there are a total of 10 social media updates. That’s the 9 generated variants plus the original/default one that consists of the original Title, Metadescription, and Featured Image for that URL.

The Team: key players in getting the word out on social media

When it comes to manpower, the larger your organization is, the better you’re positioned to create your own virality. There is no magic number, of course, as we’ve already mentioned earlier in this text. How much push is needed will depend on the niche you’re in. The wider the niche, the higher the numbers will be. In terms of online marketing, it may be easier to launch a new type of space shuttle than launching a new brand of soda.

With the space shuttle product launch, you’d perhaps have 1000 decision-makers world-wide that you want to reach. With a can of soda, everybody is a decision-maker and the audience you’d want to reach will count in hundreds of millions.

Only if there was a way to automate posting that same set of social media updates to all of the personal profiles of your organization. Right?

When you put more people on a task, and you choreograph their activities, you get an effective force that can move mountains. Quite literally, the comparison of a synchronized team can be as effective as well-timed explosions when trying to cut through a mountain. The video below is just, as an illustration, to show how engineers use millisecond-precise explosions of dynamite sticks to cut through rock and make a waterway for the now new Panama canal extension.

Imagine that you’re trying to trigger a virality effect around your URL. You’d need plenty of people. How many of them depends on your market.

Now imagine that with a few clicks with your mouse, you can disseminate this campaign to ALL of your teammates, whether you’re in the same company, or a club.

This is precisely what Populizr Enterprise does.

You see, with the Enterprise pack, you get seamless integration of the campaign builder and pass those social updates to everyone who wants to pitch in and help in your social media activism in making your message go viral. 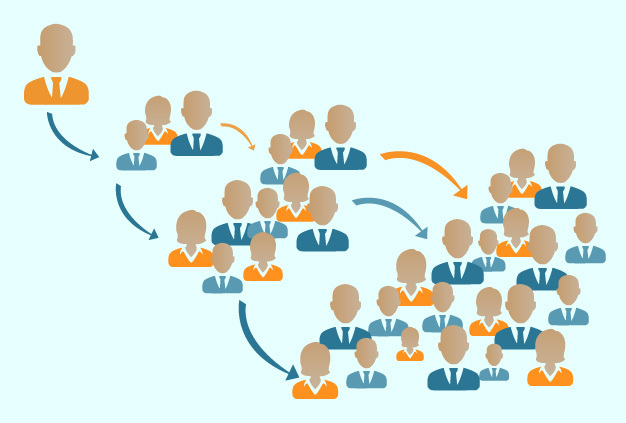 This is how it will work:

If you have say 500 people, coordinating all this without the software is impossible, and impractical. With Populizr Enterprise, it’s a few clicks of the mouse, and you’re done.

This is how social virality works.